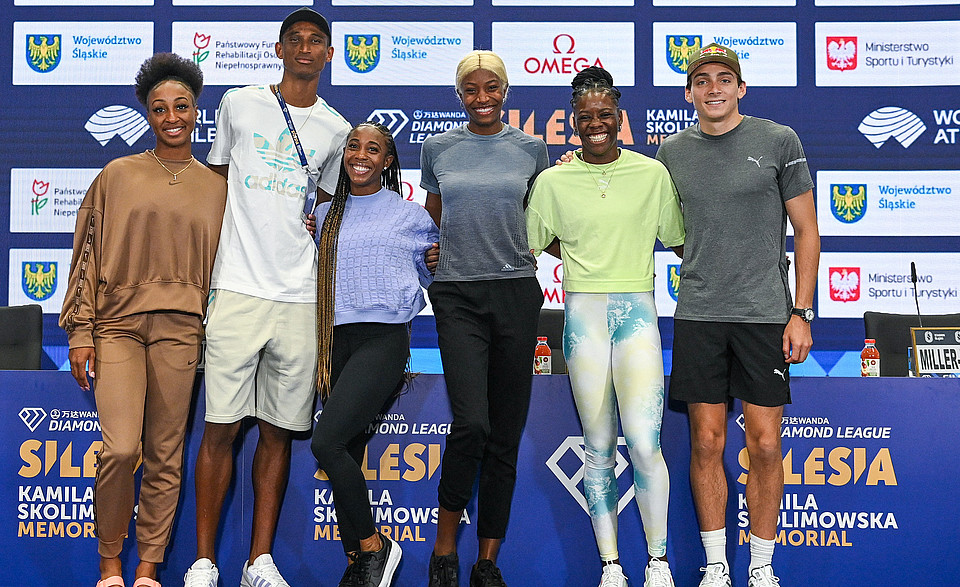 We have already shown the world Silesia is worth its trust. We may still be juniors, but we are gradually joining the elite of the major event organisers. We are thankful for the opportunity. We will show we are ready for major challenges. This Saturday will be historic - said the Silesian voivodeship assembly chairman Jakub Chełstowski at the press conference one day before the event. The biggest athletics meeting in Polish history kicks off at 1:30 PM on Saturday. Entry is free of charge for the fans.

Passing through Silesia, it is impossible to miss the information. The Diamond League logo stares at the region from advertising banners, posters and billboards. Even if some of Silesia's locals are not knowledgeable in athletics, you can hear people riding the trams talking about something big happening in the Witches' Cauldron on 6 August. That is indeed the case. This weekend, the Silesia Kamila Skolimowska Memorial is entering a new era in the history of Polish athletics. It is the first event in the country to become part of the sport's most prestigious circuit.

– I have told my friends for years that "Kama" will one day become part of the elite. But when it came true, even now, on my way to Silesia, I kept shaking my head in disbelief. It is incredible. A dream come true - stated the smiling Piotr Lisek, a four-time Skolimowska Memorial winner.

Lisek and the others present at Friday's press conference, e.g. Justyna Święty-Ersetic and Paweł Fajdek, were of one mind, all stating: - we are proud.

– I want to stress one fact right away - we do not want the Memorial to have the prestige on one-off basis. We are working on earning our place on the calendar for good, as the Skolimowska Memorial's prestige continues to grow. Why? It is tremendous promotion for Silesia. We will be shown on 155 television stations worldwide. We are investing so that the world learns about our region. I admit I am dreaming of having it all sealed with a world record, which may be set here. It is entirely possible - the voivodeship assembly chairman Jakub Chełstowski said.

It is evident this year's Kamila Memorial will be different from all previous editions - from the level of involvement of the organising committee, as well as the scale of preparations in the Silesian Stadium and the names on the entry lists. A dozen world champions from Eugene and several dozen medalists are coming. For the first time it was the top stars aspiring to participate in the meeting, rather than merely accepting the organisers' invitation. All that is because the elite is trying to accumulate Diamond League points in each event all season. After twelve qualifying meetings, the best will make the season final in Zurich. Silesia, joining the top series after just four years of trying, is now on par with the likes of Rome, Paris, Lausanne and Monaco.

The Skolimowska Memorial's brand and quality, however, have been known to the athletics world for some time.

– They say it is a good place to have fun. That is what I came here for - said Shericka Jackson, who recently moved to second place on the all-time 200 metres list. Neither she nor other stars wanted to speak openly about world records being within their reach. Not even Armand Duplantis, who was asked if he already had a celebration routine ready in case he improves his record once again. In Eugene, after clearing 6.21, he performed a front flip. - World records make you do things you did not plan. It is an emotional reaction you have not control over. I do not know what I will do if I break the record another time. The flip in Eugene was spectacular! But this reaction just shows how much I love athletics, how happy I am doing it, how much I enjoy the training and the whole process of progressing. I do not want to ever lose that motivation. That would be the end, every professional athlete would tell you that - the Swede stated.

Duplantis admitted he decided on coming to Poland after watching his national football team playing here in the spring and liking the stadium. Chełstowski previously mentioned that the attempts to join the Diamond League were first triggered by the words of Johannes Vetter. The German javelin thrower, who achieved the second-longest throw of all time here in 2020, reportedly said after the post-event reception "it is an abomination your event is not part of the elite". Two years had to pass for the dreams to become reality. It is unfortunate that Vetter - whose grandfather was born in Chorzów - is currently recovering from injury.

That does not mean there will be any shortage of excitement on Saturday.

– No meeting in Poland has ever had a field of such quality - said the proud Piotr Małachowski, sports director of the event. He gave a list of the major names, led by Duplantis. - In the sprints, we have the phenomenal Jamaicans, chasing world records just as the Swede is. We have the great hurdler Alison Dos Santos, the fantastic Ukrainian high jumpers, the giants of shot putting and middle-distance running. Joining them is a big group of Polish athletes, including the 400 metres specialists known as the Angels, Piotr Lisek, Patryk Dobek and, most importantly, the hammer throwers. I say "most importantly", as we must not forget the event was Kamila's specialty. The Diamond League is one thing, but we do it all in her memory - Małachowski stated.

At Friday's conference, the main protagonists of the event spoke of their appearance in Silesia. For some, including the legendary Shelly-Ann Fraser-Pryce, it is not the first appearance at the Memorial. She is already the meeting record holder with the 10.81 she ran last year.

– You have a very fast track here, you can use that for good performances - the Jamaican commented.

The organisers are also hoping for record attendance at the Memorial. In 2018, over 40 thousand spectators came to the Silesian Stadium. The arena has sufficient space for 50 thousand fans, who will be able to watch the competition free of charge. The hosts recommend using public transportation to reach the stadium. Seats will be available on 'first come, first served' basis.

The gates of the stadium will open at noon. The competition starts at 1:30 PM, with the main Diamond League programme commencing at 4 PM.

The event is financed by the Silesian voivodeship, PFRON and the Ministry of Sports and Tourism.