Silesia Diamond League is second-best ranked meeting in the world 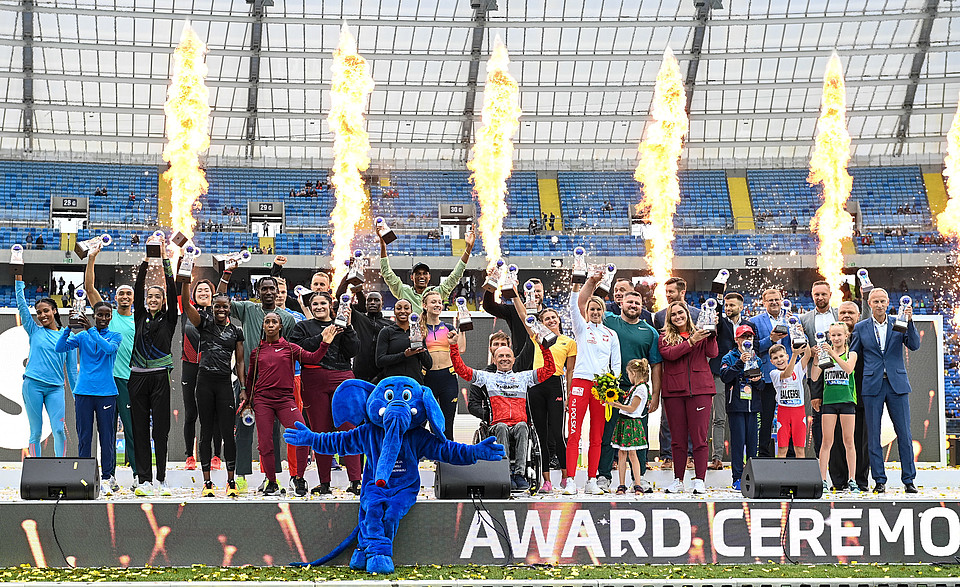 An assembly of stars, top-class results, deafening support from the stands - the 2022 Silesia Kamila Skolimowska Memorial made Polish athletics history. The Silesian Stadium's international standing is strengthening, but it is only the beginning. - The appetites are growing with eating. We would like to be the global athletics capital - admitted Jakub Chełstowski, the Silesian voivodeship assembly chairman. One major supporting argument is the meeting's position in the World Athletics rankings.

Armand Duplantis. Shelly-Ann Fraser-Pryce. Shericka Jackson. Alison Dos Santos. Femke Bol. Shaunae Miller-Uibo. Not forgetting the hammer throwers, the most essential participants at the "Kama", headed by the five-time world champion Paweł Fajdek. One world-leading mark, three national records, nine meeting records and other notable achievements. It is a list worthy of Olympic competition and it is only the shortest of summaries. Since Saturday, all the above have one thing in common: the Diamond League in the Silesian Stadium.

– I fulfilled a dream I had since my junior days. This is one of the greatest days of our careers - said the emotional Natalia Kaczmarek, who, in addition to competing on the most prestigious circuit on home ground, will remember the day for a new personal best - the first time she broke the magical 50-second barrier, only the second Polish athlete after Irena Szewińska to do so.

– Even as I was travelling to Silesia, I could not believe the Diamond League coming to Poland was a reality - those were the words of Piotr Lisek, spoken before the competition.

Silesia Diamond League is second-best ranked meeting in the world

There was no need for disbelief, it happened for real. The comments coming from athletes complimenting the quality of the event did not seem to be mere courtesy. - I hope you stay Diamond forever. I promise this is not my last visit to the Silesian Stadium - said Duplantis, world record holder in the pole vault.

Even if he did not break the record this time, the Swede was one of the main protagonists of Saturday's show, watched by 28 thousand fans in the stands, despite poor weather conditions. They could not have left disappointed. On 6 August, the Silesia Kamila Skolimowska Memorial officially joined the elite of international invitational meetings and the most faithful of the athletics fans queued at the gates even before they opened. After doing the math, it turned out the results and quality of the fields made the Memorial the second-best one-day meeting in the world this year in the World Athletics rankings! The meeting's sports director Piotr Małachowski may well be right in stating Kamila Skolimowska would be proud if she sat in the stands on the day. If the Olympic champion from Sydney, who died on 2009, was still among us, she would surely come to see the competition in person. Many former Polish greats, seen in the Silesian Stadium, stated not even an earthquake could make them miss this great day. They used to dream of an event of this status taking place in Poland.

– We came here for Duplantis! - were the words coming from fans in the stadium, often dressed up in fancy costumes or wearing T-shirts with pictures of their favourite stars. - But we also want to support our athletes, who will soon be competing in the European Championships - other fans declared.

The support brought the expected results. While Duplantis did not attempt a world record due to difficult weather conditions, the whole world learned of the exploits of Shelly-Ann Fraser-Pryce, who ran the sixteenth-fastest 100 metres ever in the Silesian Stadium. Her 10.66 is the world-leading performance. But among the 16 records set at the "Kama", it was the Polish contributions that were the most important from local perspective. Kaczmarek stated her impressive personal best of 49.86 was made possible by the fans' support. Pia Skrzyszowska, the new European U23 record holder in the 100 metres hurdles, was adamant in stating her 12.51 is an indication she will be able to battle for medals in Munich.

Silesia is capable of anything. We should not be afraid to reach for the stars

– Thanks to our Diamond League debut, we learned a lot about ourselves - admitted Jakub Chełstowski, the Silesian voivodeship assembly chairman.

Thirteen weeks. That was how much time the organisers had from the meeting officially being included in the calendar to the competition's kickoff. It was enough to put on the greatest athletics meeting in the modern history of the country. The organising committee faced hundreds of challenges along the way. On occasions, the process was stressful, requiring working fast and leading to sleep deficit, but in the end, the team emerged with a feeling of victory.

– We now await the League's evaluation and it is their impression, not ours, that will be the key to our future - said Marcin Rosengarten, the meeting's director. - It is the future that we are interested in. Appetites grow with eating. Once we made the cake, we would like to eat it every year - Chełstowski stated. The chairman did not speak of the events that have already been given to Silesia - the European Team Championships in 2023 and 2027, as well as the 2028 European Championships. - Our ambition is to remain a part of the Diamond League calendar. But on Saturday we also showed we are capable of organising World Championships. We need to keep dreaming. Especially when we have solid foundations - he added.