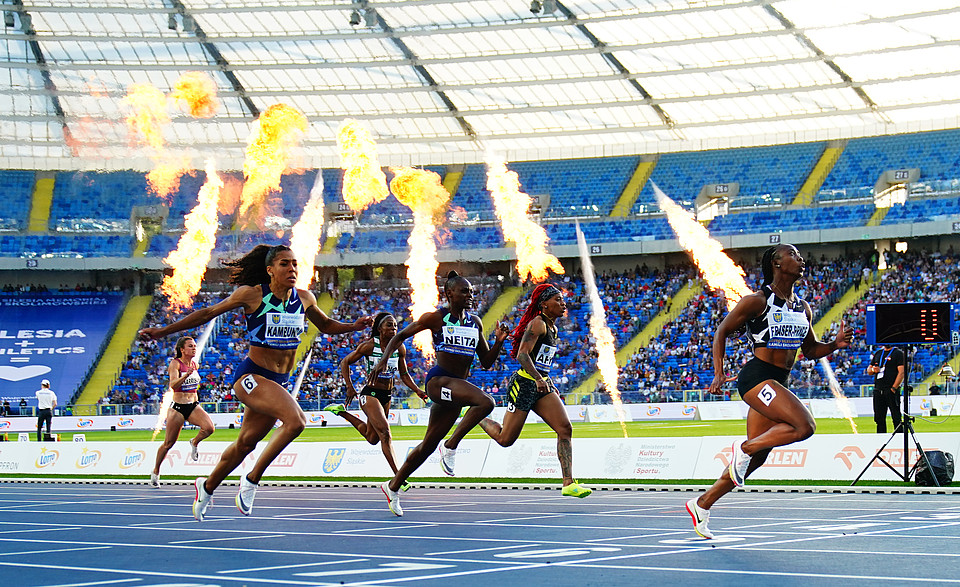 The General Assembly of the Diamond League meetings made a decision at a meeting in Rome: starting next year, the Silesia Kamila Skolimowska Memorial will become a permanent fixture on the circuit. The most prestigious athletics circuit will make a stop in Silesia on 16 July 2023.

- Stressful? It was, but that was in August, ahead of this year's test event. Afterwards, I was certain we have deserved our place in the League. I would compare our previous situation to the NBA draft. We seized our chance, we passed the test and thanks to determination and hard work, we earned a permanent place in the athletics equivalent of the Champions' League. We are not resting on our laurels, instead, we are starting the game in earnest – said the Silesian voivodeship assembly chairman Jakub Chełstowski.

It is an American dream-style story. The Silesia Kamila Skolimowska Memorial, which has been taking place in Silesia only since 2018 (it was inaugurated in 2009 in Warsaw), put a foot in the door of the Diamond League last spring. It happened on short notice, as it replaced the cancelled Chinese legs of the tour after a brief round of negotiations. The organising committee, having undertaken the task, had just three months to make the competition meet the new standards. On 6 August, despite rainy weather, 30 thousand fans appeared in the stadium and those who did not make it were able to watch television coverage in 155 countries. People all over the world found out that Silesia, which had been accepted by the Diamond League provisionally to test our quality, could stand alongside the greatest cities, such as Paris, London and Brussels, venues that have been Diamond League icons for years.

In 2022 Silesia passed the diamond test. Numbers do not lie

- According to the points table used by World Athletics, we turned out to be the sixth best meeting in the world in 2022. While we were newcomers, putting on a test event, we overtook the majority of the established high-budget events, including Stockholm, Oslo, Rabat or Birmingham. We received high ratings from the Diamond League. Behind the scenes, we heard from the League management we created a great product. The same comments were made by athletes, who felt excellent  here. The Memorial received a total of 7134 mentions in the Polish media and research showed the advertising equivalent value of the Silesia „Kama” Memorial came close to 60 million zloty – said Piotr Małachowski, four-time Diamond League champion and the current sports director of the Polish stop on the circuit. He is proud, as he and the entire team felt after the event that Silesia passed the test under difficult circumstances.

Dozens of Olympic and world champions visited the Silesian Stadium in August: Armand Duplantis vaulted 6.10, the phenomenal Shelly-Ann Fraser-Pryce set a world-leading time of 10.66 at 100 metres, while at 400 metres Femke Bol had a history-making duel with Natalia Kaczmarek, which saw them both break 50 seconds. They went on to finish 1-2 in the same order at the European Championships in Munich. That is just a short sample of a long list of attractions and stars. After having tested whether Silesia was ready to host the athletics elite on a regular basis, it was confirmed the sport holds a special place in the Polish fans' hearts. Suffice to say that between May and August, starting with the announcement of the new date of the event, over 2.5 million fans viewed the posts on its social media profiles.

- These numbers demonstrate the level of interest in the Diamond League and the promotional value for Silesia on the international stage. During the competition we conducted a survey, in which 75 per cent of the fans gave the meeting top mark. We received even higher ratings from the athletes. The Diamond League had its own survey, with 10 different areas, including accomodation, transportation, venues and support staff marked on a scale of 1 to 10. Our overall mark was 9.12 – stated Jakub Chełstowski, chairman of the Silesian voivodeship assembly, which had supported the development of athletics in the region ever since the opening of the modernised Witches' Cauldron.

Diamond League management has voted: „Kama” becomes a permanent member of the elite

After a vote in Rome, the 14 permanent members of the Diamond League officially confirmed the circuit will make another stop in the Silesian Stadium next summer, with the event becoming a full-time member of the elite group.

- To be precise, it is not just next year, but the years after that as well, as the contract we signed covers 5 years. Silesia is consolidating its place on the sporting map, not just on the European scale, but also globally. We are following suit as organisers of major events. We are appreciated for our professionalism, effectiveness and ambition in meeting the goals we set ourselves. It is also terrific promotion for the region, which has become a significant, widely recognised sporting brand – chairman Chełstowski stated.

Until now, permanent entry into the Diamond League calendar appeared impossible for events which had not been part of it from the start. The list of organisers who would like to achieve this status is likely longer than that of the current members. Naturally, since 2009 changes have been made to the calendar, but most of them either resulted from marketing reasons or were forced by international situation. The talk behind the scenes suggested the only way to achieve the honour was for a meeting to replace another one. And yet it happened. Chełstowski stated the decision on Silesia, based on sporting quality considerations, is evidence of trust that the region intends to prove it deserves. At the same time, it is a confirmation that the National Athletics Stadium will continue to play host to the biggest stars of the sport. Their appearance guarantees a great deal of excitement.

Armand Duplantis wished Silesia to be in the Diamond League. So did the Polish national team

To better understand why the Diamond League representatives gave the „Kama” a vote of confidence, it is worth recalling some of the comments made by the stars of the last edition.

- It is a place to set records. The crowd was incredible, the stadium is magnificent. I hope it is just my first appearance here, not the last. It is a place where you want to compete – said Armand Duplantis, world record holder in the pole vault, who also stated that with more clement weather, he could have attacked the world record (currently standing at 6.21) last August. - You should have the Diamond League forever. I love Poland! - shouted Joe Kovacs, number two on the all-time list in the shot put. The middle distance great Sifan Hassan stated she felt more motivated in the Silesian Stadium than she had at the World Championships.

The Silesia Kamila Skolimowska Memorial is not just about major names from abroad, it is also a showcase for the stars of the Polish team. We have become used to surprising performances coming from them. The fans may still remember the sight of Natalia Kaczmarek in tears after her race at the last edition of the Memorial. Her time of 49.86 was the fastest by a Pole since Irena Szewińska.  - This day is a dream come true. I would like to set personal bests in this stadium every year in front of this crowd – she said euphorically.

More information on the fields  for next year's historic Diamond League meeting in the Silesian Stadium will follow soon. Ticket sales kick off tomorrow, on 8 December.