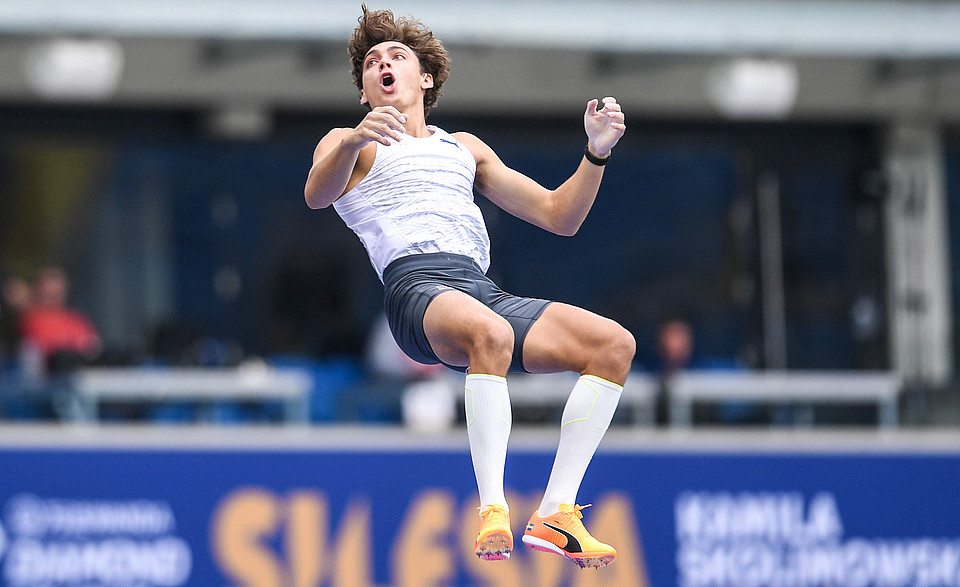 Armand Duplantis will be in action again on 15 July in the Silesian Stadium! The pole vault world record holder will be competing in the Silesia Kamila Skolimowska Memorial, which becomes a regular stop on the Diamond League circuit starting next year. Tickets for the historic event are available for sale now. Meanwhile, the list of events on the programme has been confirmed.

After the test event, which took place in the Silesian Stadium last year and received high marks from the fans, as well as the Diamond League management, the Silesia Kamila Skolimowska Memorial enters the calendar of the elite series as a full-time member. This will put Polish athletics fans within arm's reach of the greatest global stars of the sport, including Olympic champions and world record holders, for the years to come. Today, the organisers confirmed the participation of the first major name – Armand Duplantis, the top vaulter of our time, who received the World Athlete of the Year award in Monaco just a few days ago.

- He is the world record holder (6.21), who has been breaking the mark one centimetre at a time, starting with 6.17. The apparent ease with which he does it mesmerises the audiences. He mesmerised us last year as well. So much so that when we set to contracting the stars for next year's edition, we started with the Swede – said the joyous Piotr Małachowski, sports director of the „Kama” Memorial. The former discus throw great said Mondo himself opened the door to his return to Silesia. When he visited for the first time last August, he had regrets about not having set another world record in front of the great crowd. Despite the cool and rainy conditions, he broke the meeting record with 6.10.

- I liked it a lot here. It is a great place to set top performances, the crowd and the atmosphere were amazing. It was the fans who gave me the energy, that is why I was able to achieve that mark in Silesia. Setting a meeting record in my first competiion here is an encouraging sign. I intend to come back for more – Duplantis said.

Looking at the career record of the merely 23-year old athlete, it becomes clear he has little unfinished business in the sporting arena. The Louisiana-raised vaulter took the athletics world by storm and won the European title at just 19 years of age. He went on to take gold in the Olympic Games and World Championships, while also collecting the major indoor titles along the way.

- He is motivated to break more barriers and more limits. He is the most wanted man in the whole sport of athletics. Not just because of his marks, but also due to his management carefully choosing the competitions he appears in. He is not a prolific competitor. But when he does show up, he is always ready to make history. We count on him flying high once again in the Silesian Stadium next year. Personally, I'm dreaming of him breaking the world record – stated Jakub Chełstowski, chairman of the Silesian voivodeship assembly.

With time, the list of major names confirmed for the „Kama” Memorial will be getting longer. We have already learned the list of the events to be featured in the Silesian Stadium in July. Like every year, the programme will include events close to the Polish fans' hearts, with the greatest stars of Polish athletics, Olympic, World Championships and European Championships medalists, expected to compete. Among them will be the women's 100 and 400 metres, 100 metres hurdles, men's pole vault, women's javelin throw, as well as the meeting's top billing event, the hammer throw. Among those returning to the Silesian Stadium will be Paweł Fajdek, Wojciech Nowicki and Malwina Kopron, as well as Ewa Swoboda, Maria Andrejczyk and Natalia Kaczmarek – the absolute elite of the national team. The runners will be aiming for Diamond League points, while the organisers promised the hammer throw, a non-Diamond League event, will offer prize money on par with the others. It is part of a tribute to the late hammer thrower, for whom the meeting is named.

EVENTS ON THE PROGRAMME:

The Memorial kicks off at 2 PM, with the main programme starting two hours later. Tickets for the Silesian leg of the Diamond League went on sale on 8 December. Buying early will allow the fans to take advantage of our holiday discount. Ticket prices start at 10 zloty. Details can be found on the eBilet.pl site.